Following Loiselle (2006) it is diagnosed as follows: maxilla relatively immobile, bound at its posterior end to the preorbital by a fold of skin; premaxillary ascending processes flat and broad, tapered posteriorly and not overlapping in the midline; presence of a single pair of tubular nares; refelective pineal spot absent; squamation in anterior portion of body of the ‘E-type’ (sensu Hoedemann, 1958) with prominent ‘H-type’ scales; lateral line not present although some large specimens possess a shallow pit in the centre of some scales; papillae on scales and fin rays absent; haemal arches not expanded and haemal spines without pleural ribs; in adults hypural plates fused to form a hypural fan, with the join lines visible in juveniles; caudal-fin rounded to truncate with the central rays never extended; basal third to three-quarters of caudal-fin heavily-scaled, the scales in straight rows one scale wide, each series on the interspace between two rays; caudal-fin without a median lobe; filamentous extensions of the dorsal and caudal-fins variably present in males; dark gular bar variably present; no cross bars on the body; no dark spot at base of caudal-fin in males, variably present in females.

Molecular analysis suggests this genus represents the least evolved killifish known from which a large percentage of killifish are derived from.

Unlike the true annual killifish, they live as long as similar fishes, a few years, 3 years is not uncommon 5 is unknown.

Discovered by Robert Playfair in the Seychelles in 1863 the species was described as Haplocheilus playfairi by Gunter in 1866 and were moved to Pachypanchax by Myers in 1933; first kept in aquaria in France in 1867 (but not successfully, they died without reproducing) from a collection by Edward Wright. 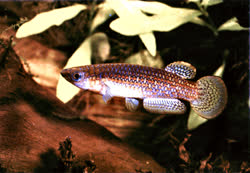 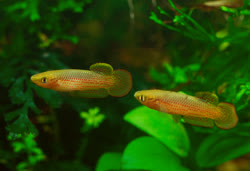 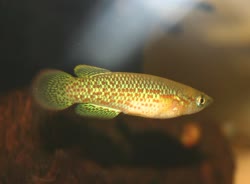 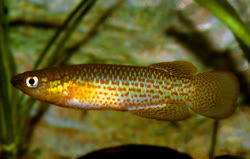 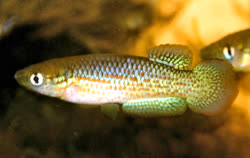 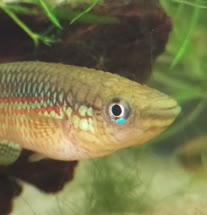 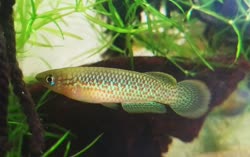 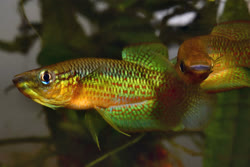 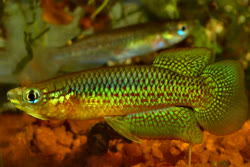 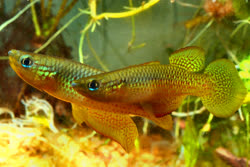 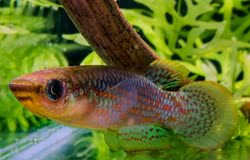